Life out of power in Albany is not easy. 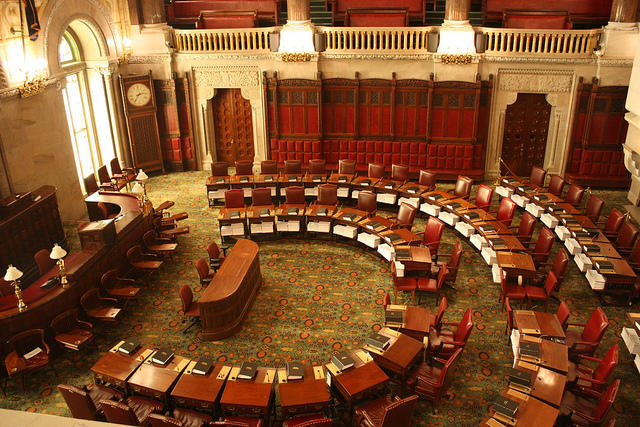 Lawmakers in the minority do not get a say over which bills come to the floor for a vote, less staff to help with constituent representation and less-than-prime office space.

Republicans in the state Senate, out of power for the first time in a decade, took to one of the few avenues a minority conference has on the first day of the legislative session: Holding a press conference.

The Senate GOP was knocking a rules change for the Senate Ethics Committee. But the complaints were really broader than that: Being in the minority isn’t fun.

“When you have one party control, one region domination, that is a concern,” said Sen. Joe Griffo, the conference’s deputy leader. “There are millions whose lives are affected and impacted here by the decisions made by the state.”

Griffo also acknowledged the power of the microphone for the newly installed minority conference.

“We will be vocal in what we initiate, what we propose and whatever is laid before us,” he said.

Democrats hold 39 seats in the 63-member Senate chamber, making a climb back to the majority a potentially long slog. Money flows to those in power in Albany and Democratic campaign coffers will likely become more flush now that they are in power.

In the Assembly, Republicans have been out of power since the fallout of the Watergate scandal. Up until now, there’s been little coordination between the Assembly GOP and Senate Republicans. That dynamic may change.

“I can’t speak for the Senate. We’re always willing to work with anybody when it comes to public policy,” said Assembly Minority Leader Brian Kolb. “We’ve always been vocal when it comes to debates on the floor. In my view, we’re not going to change.”

16 hours ago
Even before Governor Andrew Cuomo held his press conference on Friday – it became clear during the morning hours what ... MORE