Pulitzer Prize winning-author Dr. Heather Ann Thompson arrived to Hobart and William Smith Colleges to give a lecture about the history of the Attica Prison uprising and its long-lasting impacts at the Albright Auditorium on Thursday, March 7th.

Associate Professor of Religious Studies Richard Salter introduced the event that was hosted on behalf of the Human Rights and Genocide Symposium. Dr. Edward Franks, ’72 sponsors the Symposium.

Prior to her lecture, Salter noted how Thompson met with members of the HWS campus community throughout her visit by having lunch and dinner with students and facility as well as coordinating a workshop at the Fisher Center for the Study of Gender and Justice prior to the lecture.

But after issuing a warm-welcome, he yielded the podium to Thompson to let her begin the lecture that was guided by her award-winning publication of Blood in the Water: The Attica Prison Uprising of 1971 and Its Legacy.

She spoke about the challenges that society faces with the criminal justice system. Eventually, Thompson honed in on her knowledge, archival work and scholarship as an academically-trained historian surrounding the Attica Prison riot which took place in the small village of Wyoming County in upstate New York, resulting in the collective deaths of 43 officers and inmates. Thompson then slowly and painfully told the tale of the events leading to Attica, both before and after the prison riot with vivid detail from varying sources of archival documents, interviews and other methods. 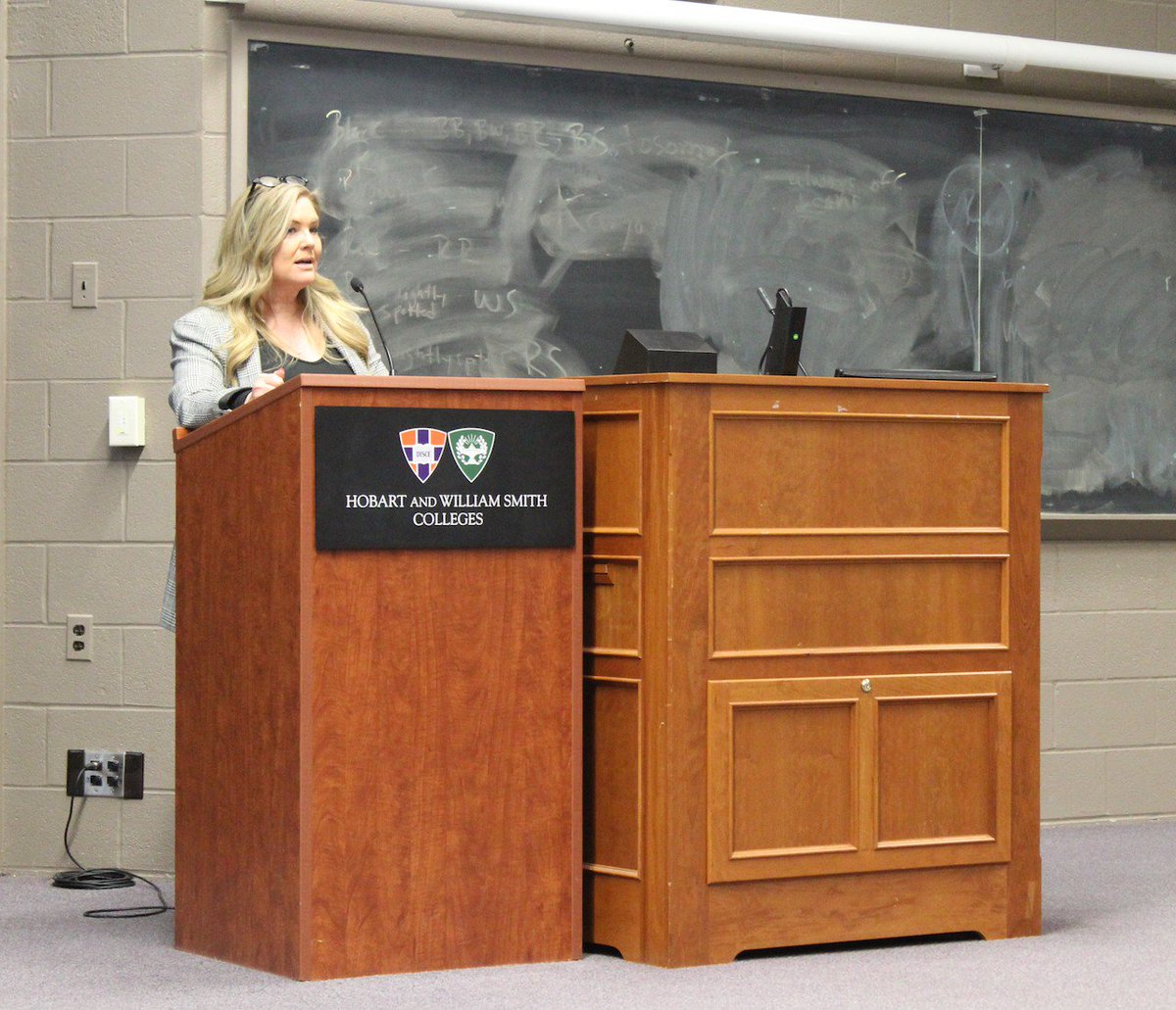 The escalation from a minor incident evolved into a riot resulting in 1,300 prisoners capturing Attica’s D-yard and the hostage situation of 42 guards and civilian workers. Billy Quin, a prison guard died from the injuries that he sustained during the initial riot and three inmates were also deemed deceased at that time. The hostage situation then served as a platform to vocalize dissent and the injustices that inmates face throughout the collective prison system.

A crucial component of her lecture placed an emphasis upon the role of presenting and representing the event in its entirety and especially inmates who were caricaturized through falsified narratives that were construed from then Governor Nelson Rockefeller’s cabinet that was then disseminated to members of the mainstream news.

From the New York Times to the Associated Press, the first-ever televised prison riot led to the dissemination of disinformation with faulty coverage of the unfolding events, resulting in long-lasting detrimental impacts upon the advocation for the rights of prisoners.

The State Police dispelled misinformation to reporters and the news media at-large. Once negotiations abruptly ended without sharing the prior knowledge shared with inmates, 450 officers discharged more than 4,500 rounds of ammunition, all 43 deaths were from the cause of inflicted gun wounds. It was then reported that the inmates killed the nine hostage guards by slitting their throats in the fashion of an execution, contrary to historical documents and other public records that specified that no such actions transpired, most notably when Monroe County coroner Dr. John Elland dismissed and refuted allegations, prescribing that all deaths were caused by bullet wounds, some even with precision accuracy shooting.

Instead, through her archival work and diligent research, Thompson demonstrates that the prisoners were conscientious throughout the prison hostage situation by electing representatives from each cell block to democratically participate in the decision-making process; moving the bodies of those injured out of the prison itself in order to seek medical assistance at hospitals for their wounds as well as let in a observation commission consisting of journalists, legal and state representatives to bear witness to the circumstances inside the prison while the standoff was underway.

Consequently, Thompson argued that the horrifically-fabricated narrative of the Attica Prison uprising set back American voters and “soured a generation,” resulting in harsher punishments and displacing blatant disregard towards those incarcerated by the state through the enforcement of legal law and tainting public opinions.

Specifically, Thompson recounted numerous incidents where human rights violations and sheer disregard for the human condition surfaced by a host of actors: correctional officers, law enforcement personnel, elected officials and even the Federal Bureau of Investigations, who instigated tensions and rumors among a militia-like army that surrounded the prison during a four-day standoff hostage situation: most of which were armed with at least one or two firearms each and some even carrying shotgun pellets and dum-dum bullets ammunition that were outlawed by the Geneva Convention. Beyond that, the FBI even sent routine play-by-play teleprompts to higher chains of command throughout the country to keep them informed about the concerning predicament at Attica. 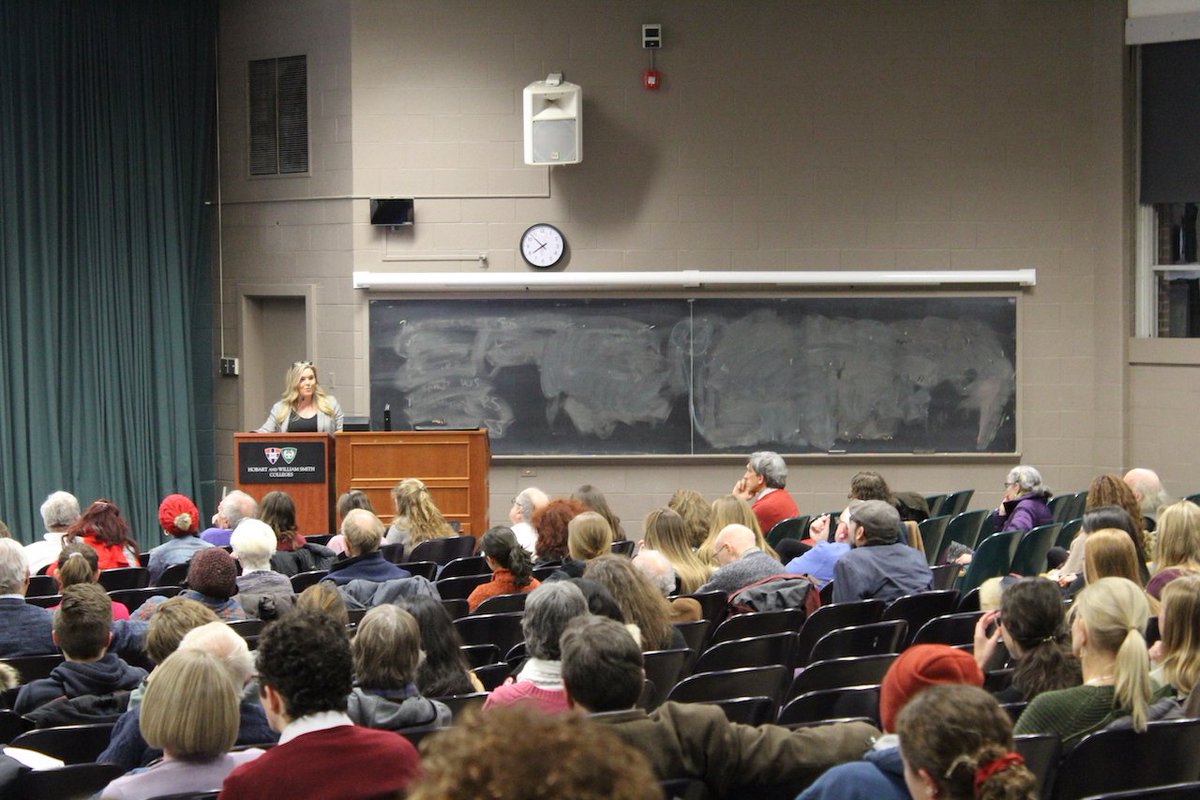 Many of these stories led to tears shed by those in the audience, especially in the instance of Mike Smith, also known as Big Black. He was mercilessly tortured by Attica correctional officers following the riot in an attempt to implicate him for death of a guard. Smith served as the captain of the prison football team and as a result they placed a football under his head, warning him that if he were to drop it, they would shot him; he survived 8-hours without dropping the football and lives to tell the tale of his traumatic experience in Attica.

Black’s scenario stands merely one story among many that Thompson outlined during the lecture and in her critically-acclaimed publication which won the Pulitzer Prize in History for 2017; Brancroft Prize in American History and Diplomacy for 2017, among many other awards and distinctions.

She also made it clear how difficult it was for her to find these various documents in order to prove the validity of these events as well as share this important history with the rest of the public, especially in regards to the Freedom of Information Act.
Noting the importance, Thompson posed the question how the United States has become so punitive through perversely cruel and harmful ways.

Although the two-hour evening was filled with gruesome and grotesque verbal and visual reminders of Attica’s controversial history and legacy, Thompson still has hope that the American public may see the harms of the greater carceral state upon its own citizens that are imposed in the most closed-off spaces of society.

Ultimately, Thompson mentioned that the violent and brutal public history of Attica Correctional Facility uprising emphasizing that the horrific incident serves a moment in history and “opportunity to bring all of us into the prison.”

8 mins ago
TAGex Brands is hiring for workers in their warehouse in Romulus at the former Seneca Army Depot. Details on the ... MORE