After getting shut-out by the Muckdogs on Friday and being held scoreless through eight innings on Saturday, the Doubledays were given a shot in the arm with a leadoff home run by Rhett Wiseman to lead off Sunday’s game against the Black Bears. Coupled with a perfect start by Jackson Rutledge and an exceptional relief appearance by Todd Peterson, the Doubledays appeared to be in a good position to break their two-game skid.

But unfortunately for the Doubledays, seven perfect innings of baseball wasn’t enough to put away West Virginia. Auburn fell, 5-3, as the team was unable to hold off the Black Bears’ late rally.

Jackson Rutledge — making his home debut — pitched exactly how you’d expect a first-round draft pick to perform. His strikeout of leadoff man Ethan Paul was indicative to what was to come the rest of the night, as the opposition went 12 up, 12 down over his four innings of work. His fastball — which topped out at 96 MPH in the humid Auburn air — overpowered his competition as he passed the torch to seventh-rounder Todd Peterson.

Black Bears starter Jesus Valles settled down some after allowing Wiseman’s leadoff home run, but ran into trouble again in the fourth. Jeremy Ydens lined a ball deep to centerfield to leadoff the inning, which allowed Jack Dunn to bring him home on a sacrifice fly. Wiseman was back at it in the fifth inning, leading the inning off with a walk and scored on a Jose Sanchez double.

The Doubledays didn’t miss a beat as Peterson took over for the Nationals’ 1st round pick of the 2019 draft. He took the perfect game all the way into the eighth inning, but was broken up by a fielding error by J.T. Arruda. The no-hitter was soon out the window as well, as Matt Gorski followed with a triple to plate the Black Bears’ first run of the game. Gorski came home on a single, and just like that, West Virginia was right back in the game.

Tyler Yankosky took over pitching duties for the Doubledays and quickly ran into trouble. A leadoff walk turned into a runner at third after a passed ball, and a fielder’s choice to try and tag the runner out at home failed to tie up the game. A double by Gorski gave the Black Bears the lead, scoring two runs.

Garrett Leonard shut the door on the Doubledays over the last two innings, allowing just one hit while striking out a pair.

Auburn tries to break the losing streak in the final game of the series against West Virginia on Monday night at 7:00 pm at Falcon Park. You can listen to every pitch, LIVE, on FingerLakes1.com Radio. 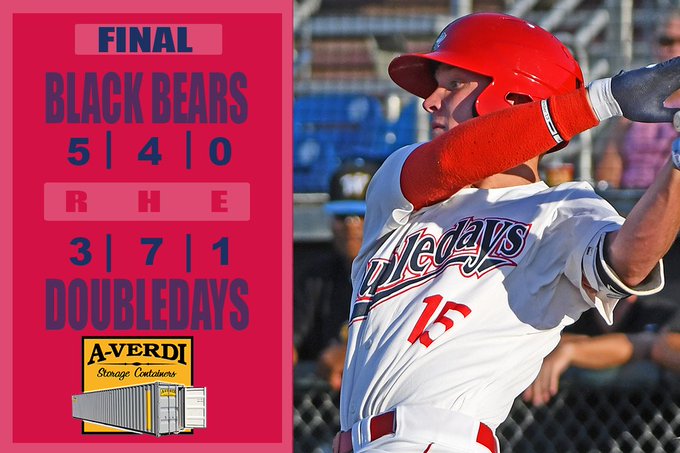