Syracuse improved to 2-2 on the season with a 52-33 victory of Western Michigan in the Dome on Saturday afternoon. Tommy Devito accounted for 5 touchdowns and the Orange defense forced 4 turnovers en route to the 19-point win. Full coverage, highlights and Coach Babers’ post game press conference below… 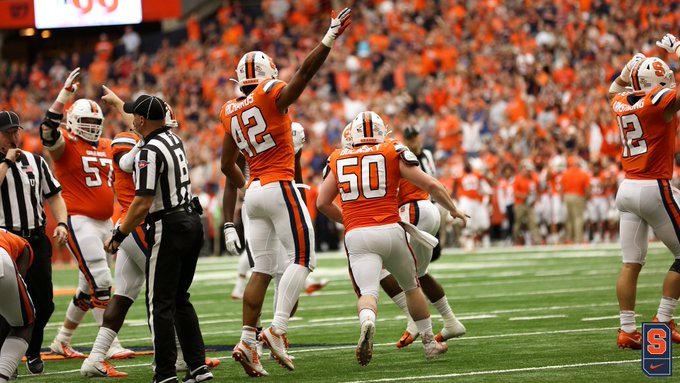 – Offense carries Syracuse to wild win over Western Michigan (Syracuse.com)
– 3 takeaways from Syracuse’s 52-33 win (Daily Orange)
– They made this about as interesting as they could (TNIAAM)

It's over at the Carrier Dome. Syracuse improves to 2-2 on the season with a 52-33 win over Western Michigan. Tommy DeVito finishes 27-of-35 for 287 yards and four touchdowns. Stats below. pic.twitter.com/2ExZ8b5m6I

Syracuse (1-2 ) continues its three-week stretch of home games this Saturday by welcoming Western Michigan (2-1) to the Dome for the first time. Kickoff is set for noon and the game will mark the Orange’s first appearance on the recently-launched ACC Network. It’s Military Appreciation Day and recognition’s of our servicemen and women for their many sacrifices will take place throughout the game.

The Orange are coming off their first home defeat in more than a calendar year, a 41-6 defeat at the hands of the top-ranked Clemson Tigers. Syracuse hung with the Tigers in the first half and trailed 17-6 at intermission. In the third quarter, the Orange defense created two turnovers, but Syracuse could not capitalize and Clemson eventually pulled away.