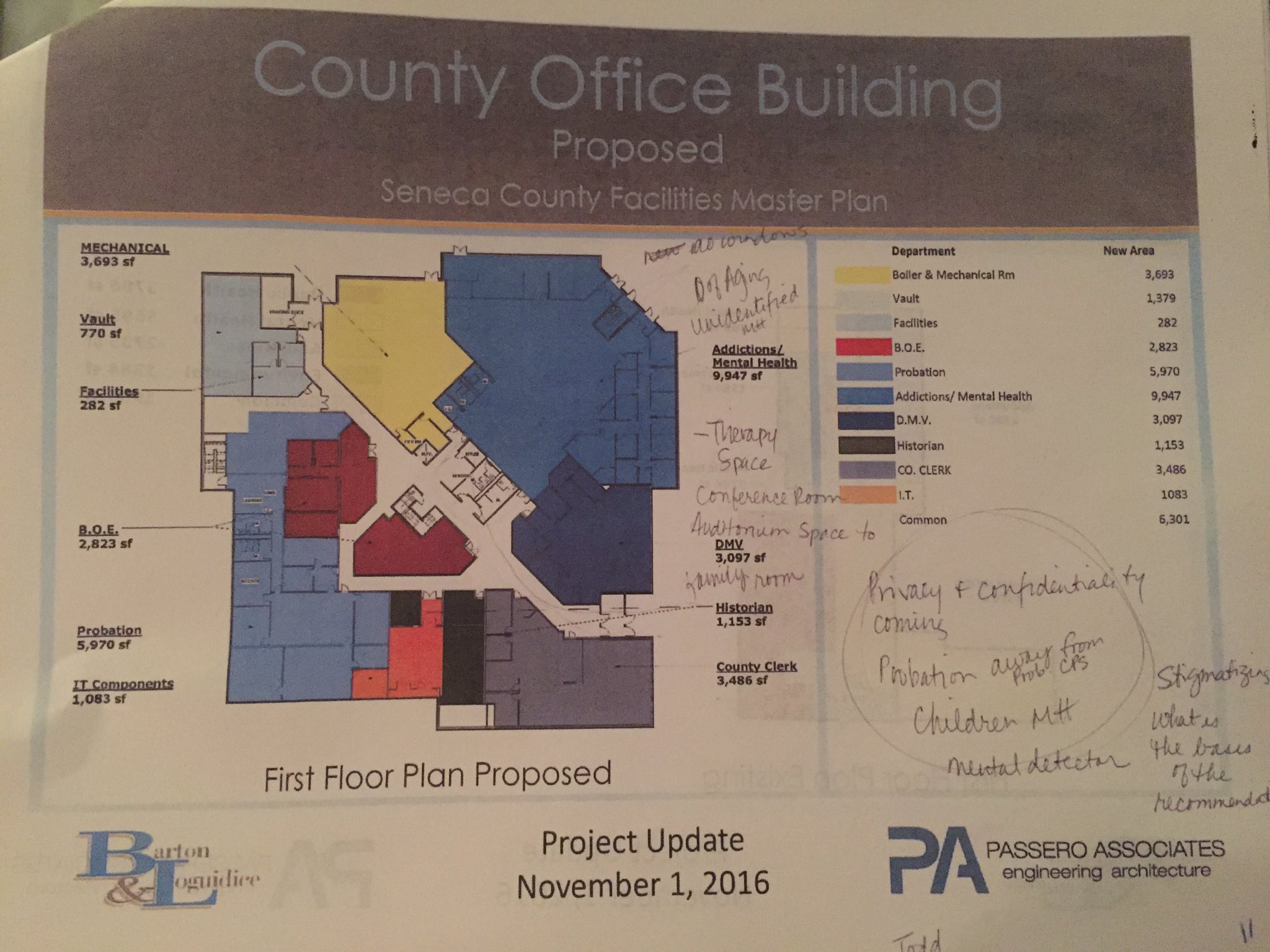 The trio expressed concerns around that move citing a lack of evidence, which would provide solid reason for moving the Mental Health and Addictions office to the space currently occupied by the Office of the Aging.

Faivre said, “I feel that it is incumbent upon me to advocate for not just the consumers of services, but also for the individuals who provide them.” She continued, “Moving forward with the plan presented by Passero, actually puts the current offices into a space that has less square footage, with no opportunity for office space expansion.”

A variety of issues were pointed out with the transition, including the lack of natural lighting. All three presenters pointed out the importance of having natural lighting in an office setting such as one where treatment is taking place. Some of the other shortcomings included restroom space, storage, treatment specific spaces, such as a family waiting area, medical exam room, play therapy room, and forensic interview space with two-way mirror.

In all, the presenters pointed out that about 798 square feet would be needed. This figure would be in addition to the square footage in the current Office of the Aging located in the Seneca County Office Building.

Another problem is the placement and location of the Office of the Aging. When the County Office Building was constructed it was created with placing the Office for the Aging in a place that would allow for quick access to other crucial services that might be common for those elderly customers to easily access. Services like the DMV, DHS, Board of Elections, and the County Clerk’s Office.

The firm handling the design is Passero Associates, which is currently part of a larger, broader reorganization of services at the current County Office Building, as well as the former Bonadent building.

Dinan addressed the board reiterating many of the same points expressed by former director Scott LaVigne, who recently left Seneca County for a similar position in North Carolina. However, he addressed some of the concerns about what kind of threat those with mental illness pose on those around them physically.

Dinan said that 1 in 5 American adults experience a mental health issue. More serious mental illnesses, such as Schizophrenia, Bipolar Disorder, or Major Depression are seen at rates of 1 in 25 Americans. Violence, which Dinan points out is an absolute rarity – often comes in form of self-inflicted violence. Suicide was the tenth leading cause of death in the U.S. in 2014.

The numbers also reveal that those who suffer from a mental illness are actually as much as 25 percent more likely to be victims of violence, as opposed to being perpetrators of that violence.

“I ask that any idea of social stigma, not be a factor in your decision-making process. I ask that you consider taking a stance in support of the people in our county who struggle with mental illness, chemical dependency or both,” Dinan concluded.

At Tuesday’s meeting of the supervisors they weighed the options before them. Particularly a resolution, which would move the Office of the Aging, Environmental Health, and Public Health departments to the former Bonadent Facility.

Seneca Falls Supervisor Greg Lazzaro expressed concerns about the cost of such an undertaking. Varick Supervisor Bob Hayssen shared that sentiment reiterating that the decision “feels like it’s being rushed.” He continued, “We haven’t had any time to digest this information.”

Some debate was tossed around on the subject. However, a motion to table the matter, which would have pushed it to a special meeting on November 22nd prior to the board’s standing committee meetings failed.

The resolution passed accepting the study, which according to Seneca County Manager John Sheppard ensures that the County does not lose $50,000, or the entire deal on the former Bonadent building.

Additional debate around these moves is expected to be seen in the coming weeks. The board will meet again for committee meetings on November 22nd at 5 pm at the Seneca County Office Building.