With an intense passion for food and farm-fresh ingredients, Fabio Viviani brings that same essence and spirit to his new restaurant Portico by Fabio Viviani which opened Feb. 23 inside del Lago Resort & Casino. The restaurant features a sophisticated take on Old World Italian-inspired foods and handmade pastas, as well as seafood, steaks and chops grilled over hardwood. Viviani found inspiration from the bountiful agriculture, cheese makers, wineries and breweries of the region to help develop his menu, focusing on local, seasonal farm-to-table ingredients. 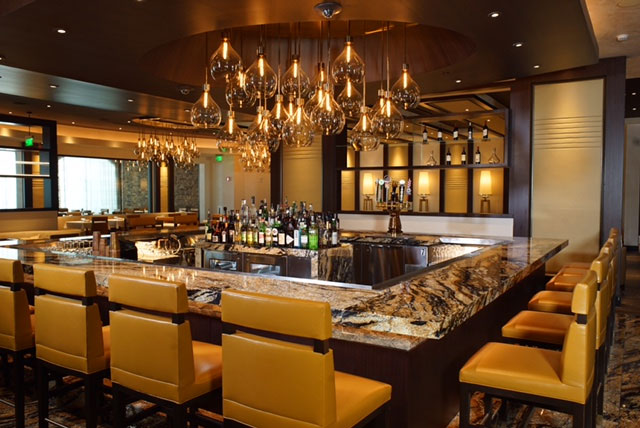 Perhaps best known for his television debut on Bravo’s hit reality series “Top Chef” and earning the “Fan Favorite” title, Viviani’s on-screen appearances have propelled him to become one of the fastest-growing culinary names in the country. Viviani has appeared as a recurring guest on shows such as “Good Morning America,” “The Talk,” “The Chew” and “The Rachael Ray Show,” and is a recurring guest host on the Hallmark Channel series “Home and Family.” The successful restaurateur is also the owner of several well-known restaurants across the country in Los Angeles and Chicago, to name a few. He is also a New York Times best-selling cookbook author. Portico is Viviani’s first restaurant in New York state.

“Since we opened our doors on Feb. 1 we have had thousands of excited guests visit del Lago Resort & Casino and we are thrilled to now offer our customers another great place to dine and enjoy a cocktail,” said Executive Vice President and General Manager Jeff Babinski. “The opening of Portico by Fabio Viviani has been so highly anticipated and we are looking forward to officially welcoming Fabio and his restaurant to the Finger Lakes region.”

Viviani is no stranger to the Rochester area. In 2008, while competing on “Top Chef,” one of his challenges was to cook a Thanksgiving dinner for the rock band Foo Fighters while they were on tour in Rochester using only a toaster oven and microwave. Since then, he has visited the Rochester and Finger Lakes area many times over the past year to meet with local purveyors to learn more the region’s offerings.

“Just as ‘portico’ in Italian means a porch or gateway to the home, del Lago Resort & Casino will serve as a gateway to the beautiful Finger Lakes region,” Viviani said. “This concept is truly a natural fit because we will be supporting the local economy by using products from our region. A majority of our menu items are made with locally sourced products from within 100 miles of the restaurant when available.”

Viviani was drawn to del Lago and the Finger Lakes because the region reminds him of his home in Italy. “Growing up in Florence, we sourced all of our food from local purveyors, and I am excited to bring a piece of my childhood to the Finger Lakes,” he said. “My cooking philosophy was discovered at a very young age in my grandmother’s kitchen, where I learned simple ways to bring together exceptional flavors that delighted our family, just like Portico’s sophisticated take on Old World Italian-inspired cuisine and farm-to-table fresh ingredients will be sure to delight our guests.”

While his grandma’s red sauce has been an inspiration, the restaurant’s menu is worlds apart. Portico chefs make pasta, gnocchi and breads from scratch daily and an in-house facility wet-ages beef. In addition to the locally sourced produce, meats will also be procured locally. While some cheeses will come from The Muranda Cheese Company in Waterloo, other cheeses and Prosciutto di Parma will be sourced straight from Italy.

Del Lago Resort & Casino is a partnership between Rochester-based Wilmorite Inc. and Peninsula Pacific. Peninsula Pacific comprises the former leadership team from Peninsula Gaming, which has a combined 50 years of experience developing and managing regional casinos in five states. JNB Gaming manages the casino as JNB and its principals are widely recognized throughout the country as premier casino developers and operators.