After 14 innings of play last night at McDonough Park in Geneva, what separated the Red Wings (19-15) from the Jammers (26-7) was a Dominic Toso (Bucknell) RBI single to left.

Jamestown came roaring back in the top of the sixth. A pair of singles from Chris Estra (UTSA) and John Conti (Canisius) were complemented by a sacrifice fly Ben Brookover (UTSA) to tack on four runs in the inning and tie the game.

The Jammers added their fifth and sixth unanswered runs in the top of the eighth. A pair of errors allowed Brookover and Skyler Valentine (UTSA) to score on sacrifice flies.

The Wings scored two of their own in the bottom of the frame. Toso scored on an RBI groundout from Jake Evans (Alabama Southern CC), and Mikey Arman was plated by a 1 out Matt Smith double. 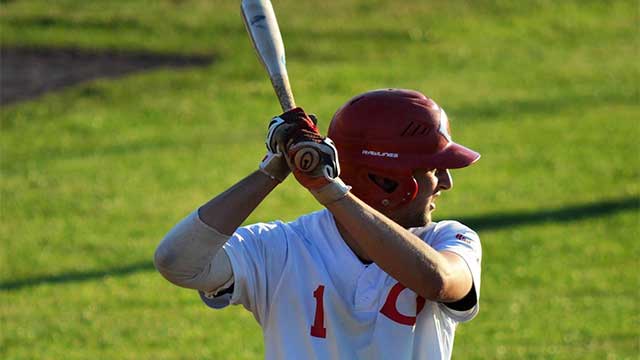 At this point, scoring ceased until the 14th. Five and a half frames of baseball were played without a run, as the contest between the top two teams in the West dove deeper into extra innings. The main event of this stretch was undoubtedly the battle between the single relievers for either team. Colin Johnston (Monroe CC) gave his team 6.0 innings of one run baseball, and that lone run proved to be the difference. He came on in the bottom of the eighth inning to kill the Wings momentum, and proved effective through an inning count matching that of a starting pitcher’s.

Colby Mullins (Andrew College) earned the victory, in every sense of the verb. 6.0 innings of shutout relief paved the way for Geneva to eventually walk off in the bottom of the 14th inning.

The offensive half started with a Matt Collins bloop single down the left field line. Following that at bat, Matt Chamberlain (University of New Haven) sacrifice bunted him over the second. The next batter, Yohei Ishiyama (Nihon University, Japan) reached with an infield single off the pitcher’s glove. This allowed Collins to race to third. Dominic Toso sealed the deal with a laced single through the left side, and the celebration began when Matt Collins crossed home plate.

Andy Reed (Elmira College) started the game for the Red Wings, tossing 6.0 innings and surrendering four runs. He retired 11 Jammers batters in a row at one point. Michael Ginther (Canisius) was the starter for Jamestown, and he finished with 6.2 innings while giving up four.
The Red Wings return to action against the Elmira Pioneers (17-16) at McDonough Park in Geneva on Wednesday, July 12.