Despite cloudy skies all day, things stayed dry at Canandaigua Motorsports Park and fans were treated to the annual Family Autograph Night, sponsored by Pampered Parents, along with a Youth Demo Derby to end the night’s racing program.

In the 25-lap Sportsman feature, Matt Guererri held the early lead, but Kane Bristol moved past Austyn Fugle for second and caught up to him. As they battled for lead, Dave Marcuccilli and Kevin Ridley were moving into the top five. Paul Guererri was also on the move, grabbing second and challenging Bristol for the lead. As the race passed halfway, the battles within the top five continued, but then on lap 16 a transformer fire erupted in the infield, knocking out the track lighting system and halting the race. For Guererri, it was his second win of the year, with Bristol, Matt Guererri, Marcuccilli, and Ridley in the top five spots. Repairs were not able to be made, so the race was called complete at that point. 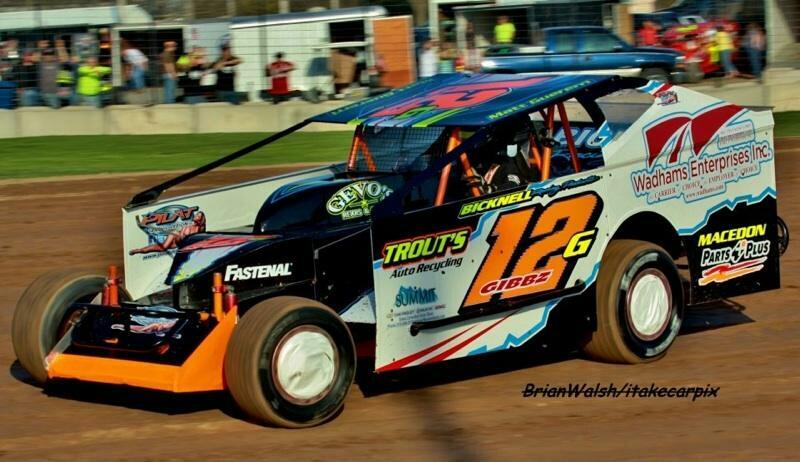 The remaining events on the card, including the 35-lap Modified feature and the Youth Demo Derby, will be made up at a later date to be announced. Modified heats were won by Steve Paine and Gill Tegg Jr.

Dash For Cash was held, with Kane Bristol taking the win in that 4-lap event.

Lee Sanders charged from his third starting spot to the lead in the 20-lap 305 Sprint car feature. Dave Ferguson Jr. moved from fifth to second by lap 5 and began chasing down Sanders, catching and passing him for the lead on lap 9. A lap 13 yellow for Dan Craun’s spin bunched the field back up for a restart. Ferguson held off Sanders on the restart and took the win in his first appearance this season over Sanders, Smith, Jason Whipple, and Bobby Gardner.

Steve Pesarek took the lead for the first four laps of the 15-lap Street Stock feature, but Adam Depuy took the lead on a restart, dropping Pesarek to second. Jason Doty battled with Mike Welch and Nick Dandino, grabbing third by lap 5 as Dalton Martin also moved into the top five. Martin eventually moved up to third, passing Doty, who’s engine expired on lap 12, setting up a three-lap shootout for the win. Depuy again pulled away from Pesarek for his fifth win of the season, followed by Pesarek, Martin, Brad Steinruck, and Nick Dandino.

The Street Stock heat was won by Adam Depuy.