Big snowfall is not expected for the Finger Lakes this week — even as another nor’easter makes its way up the coast — dumping heavy snow along the New England coastline.

FLX Weather Meteorologist Drew Montreuil says the latest shot of cold air, which will be ushered in behind that coastal system — will keep temperatures down, and the lake effect snow disorganized.

Temperatures are expected to hover in the 20s and 30s throughout the week. Montreuil notes that a warm-up is possible at the end of the week, but will be short-lived — as the long-term forecast calls for temperatures to fall back below normal for the following week.

As always, the forecast can, and frequently does change, so stay tuned to the FingerLakes1.com Weather Center for the latest from the National Weather Service, and other great weather resources. 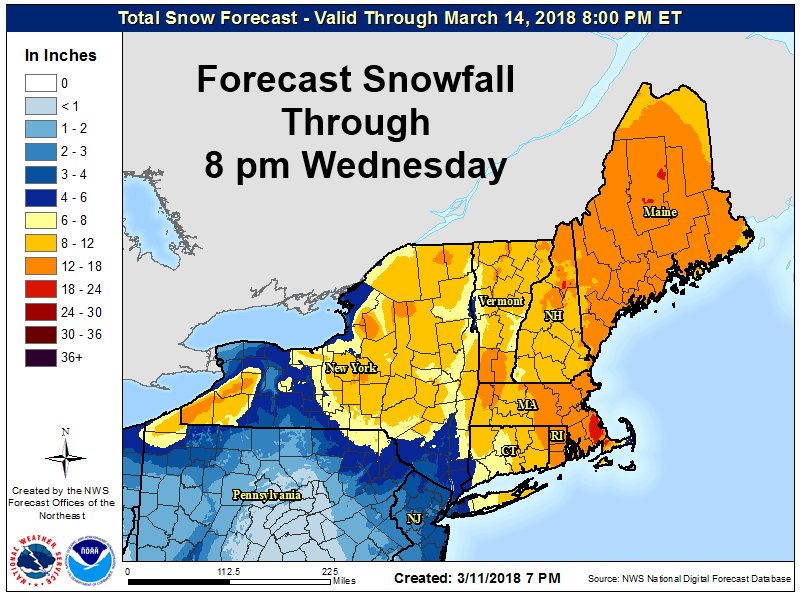 After quiet weather today and early Monday, snow enters the picture once again for CNY/NEPA. Details below. pic.twitter.com/ZIxjYJlNoO

Midweek snow threat around here even though the major storm misses well to the east. Similar set-up to end of last week. pic.twitter.com/Q2kxTGacQ2

Then & Now: Amazing difference from exactly one year ago here at Lake Ontario in West Webster, NY. No "Ice House" this year due to lack of wind whipped waves, unlike a year ago–when this property was pummeled @spann @JimCantore @StormHour @TomNiziol @wxbywilliams @NatalieKucko pic.twitter.com/XX3u0ll4C3

March 11-17th NWS Buffalo will be recognizing Flood Safety Awareness! Each day we will be posting a tip for helping keep you and your loved ones safe. To learn more about safety visit: https://t.co/mYguIgPLLB #FloodSafety #NYwx pic.twitter.com/YsX4XUmTEX

Below normal temperatures today, but at least it will be dry and there will even be some breaks of sunshine. pic.twitter.com/V0wf2RWu2W

More snow to get through this week but it is looking a little better in time for the weekend and the all important St.Patrick's Day and parade on Saturday. pic.twitter.com/wQD2J2uix6