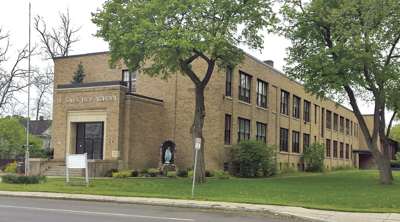 Nick Massa attended the former DeSales High School in the mid 1960s. Now, he owns the building at 90 Pulteney St. that housed the school, which closed in 2012.

Massa, president of Geneva-based Massa Construction, plans to convert the school building to market-rate housing units. The gymnasium at the west end will continue to be available at no cost for use by the nearby St. Francis-St. Stephen’s School.

The sale between Massa’s 1967 LLC and Our Lady of Peace Parish has been negotiated for months, complicated by the involvement of the Diocese of Rochester and the parish’s status as a not-for-profit. It had to be approved by either a state Supreme Court or the state Attorney General because under law, the sale of property by a not-for-profit requires that approval. The Attorney General’s Office approved it.

The formal transfer of the deed took place Wednesday. The purchase price is $380,000, according to the Rev. Tom Mull, pastor of Our Lady of Peace Parish.

The school opened in 1912 and operated for 100 years, graduating more than 4,000 students, many of whom have gone on to prominent positions in local government, business and other fields. The current building was opened in 1962.

Key figures in the deal — Michael Roulan of Geneva, attorney for Massa, and City Judge Tim Buckley, legal consultant for the parish — are both members of the Class of 1967 at DeSales and were classmates of Massa.