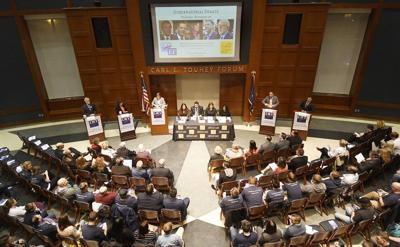 New York Gov. Andrew Cuomo didn’t show, but his four challengers swapped ideas and joined together to criticize the incumbent in a largely amiable debate Thursday night in Albany.

And while the Democratic incumbent may not have been present — unless you count a man in a chicken outfit wearing a “Cuomo” sign — he was the main topic of conversation, with all four of Cuomo’s challengers agreeing that voters need an alternative.

“Shame on Andrew Cuomo for not coming here,” said Green Party nominee Howie Hawkins in one of the evening’s biggest applause lines. “The question in this election is this: Are we going to give Cuomo a free ride or are we going to demand more?”

Hawkins, Libertarian Larry Sharpe, Republican Marc Molinaro and independent Stephanie Miner all slammed the incumbent’s handling of political corruption, upstate economic development and taxes and used the debate — which was not televised — to highlight their own records and ideas.

Miner touted her experience as a two-term Democratic mayor of Syracuse, where she said she worked to improve high-school graduation rates and the city’s crumbling water and sewer lines. As mayor she emerged as a leading critic of the governor.

“The reality is that the system works very well for the people it rewards,” she said during a discussion about the need to reform byzantine voting rules blamed for dampening voter turnout in the state.

Sharpe, a businessman, said the state’s problems demand a new approach untethered to traditional politics. As an example, he proposed selling the naming rights to bridges and roads to raise money for maintenance.

“Who has the newest ideas? This guy here,” he said. “I’m the one talking about new and different things.”

Hawkins called for big investments in education, renewable energy and roads, bridges and water infrastructure. He blamed both parties for not doing enough to address water quality and climate change. In the 2014 governor’s race, Hawkins placed third after Cuomo and Republican Rob Astorino.

Molinaro, who polls say is comfortably in second place in the race, cited his tenure as Dutchess County executive and said he would work with all parties to find solutions to the state’s problems. Molinaro was elected mayor of Tivoli, New York, at age 19.

“I’ve spent every day of my adult life making government function for people,” he said. “Today after 8 years of the ‘status Cuomo’ we are the highest taxed state in America. We have the most corrupted state government… We need to start again.”