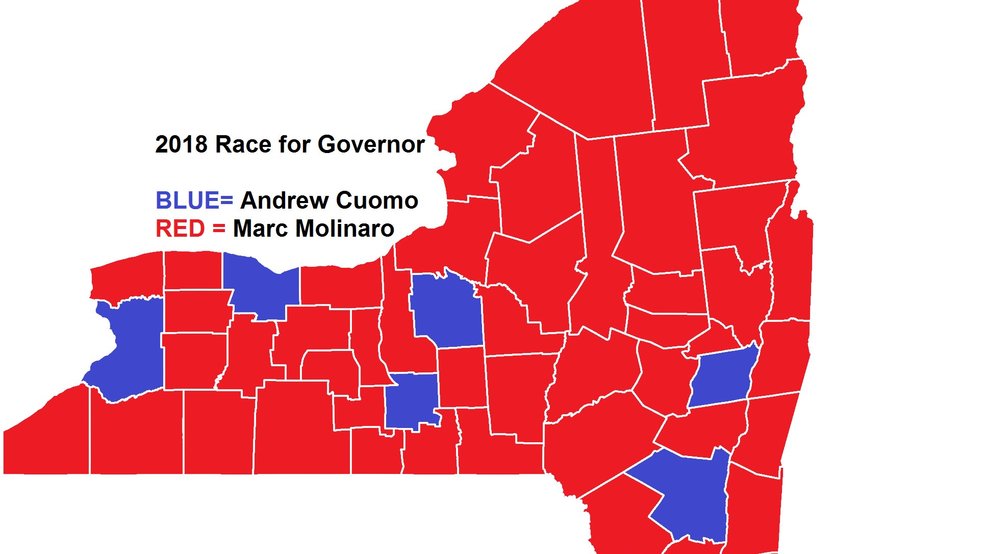 Gov. Andrew Cuomo improved on his 2014 performance in central New York during Tuesday’s midterm elections, winning more votes in each area county than he did four years ago.

The Democrat easily defeated Republican opponent Marc Molinaro in his bid for a third term as governor of New York, beating him by 22 points, according to the New York State Board of Elections.

Despite a Siena College poll showing his lowest favorability rating in the eight years he’s been in office, Cuomo defeated Molinaro by a larger margin statewide than his 2014 opponent, Rob Astorino.

In central New York, Cuomo won Onondaga County and received 17,379 more votes in the county than he did in 2014. He also carried the Democratic stronghold of Tompkins County, receiving 10,579 more votes there than four years ago. Cuomo lost the surrounding counties of Cayuga, Oswego, Wayne, Oneida, Madison, Cortland, Seneca and Chenango, some by huge margins. But even in those counties, Cuomo received more votes than he did in his last election.

31 mins ago
On Wednesday, Governor Andrew Cuomo announced that outdoor dining would be allowed in the second phase of economic reopening. Numerous ... MORE

56 mins ago
Officials joined in peaceful protest during the afternoon hours in the city of Canandaigua, as another regional rally was held ... MORE