What’s next for the Heritage Preservation Commission, the Town of Seneca Falls, and a building at a busy corner on Fall Street?

Legal representation. This after the Town of Seneca Falls received a court order on Wednesday, signed by Judge Doyle. The Town Board met on Friday in a special session to discuss the matter further.

“There was a request made by Mr. Bove to have the town attorney disqualified from representing the HPC that application was denied on the other hand he said that there may be the appearance of different roles between
the goals of the HPC and the this board which may lend itself to the appearance of an impropriety or the appearance of work more appropriately of a conflict in interest,” explained Foster at the start of the session.

As one resident asked at an earlier meeting: Why can’t the Town Attorney represent the HPC?

“I have represented them I filed an answer on their behalf I have appeared in court in more than one occasion and at this point they have been dictated they want a second or another opinion as to some of the issues so what judge Doyle is doing is he is allowing them to have an opinion in this particular case only so they’re not hiring counsel for the HPC for whatever it’s that he is directing that they have counsel,” Foster continued. “They put restrictions on it by asking that counsel form and advise the court of their plan what they intend to do the scope of their services and the cost he gets because it’s a municipality,” Foster added. 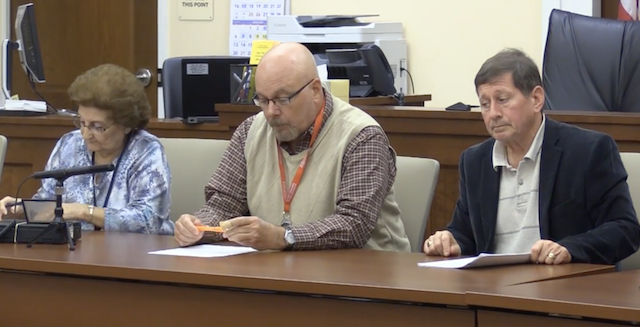 It means the Town should be able to get a better rate for that service.

The net result of the proceedings this week – where Foster learned those aforementioned details: A court order dated November 8th, ordering the Seneca Falls Town Board to provide counsel to the Heritage Preservation Commission in the case involving Peter Koch.

Hancock Estabrook, LLP., based out of Syracuse will represent the HPC in this matter. In essence, the court order deems that the hire of outside legal counsel for this matter is to avoid the appearance of impropriety, since the HPC and Town Board have different goals and objectives.

Another concern is the possibility that the HPC be ruled incapacitated under legal filings. Part of Koch’s Article 78 challenges the legal filing to form the HPC; and according to Foster, the fact that a case like this has not been ruled on in the past by any other court – the matter becomes complicated, and possibly a long-term one.

Furthermore, the complications involved if the HPC is ruled non-binding – on previous decisions by that board, and other items current on its docket – become extensive. “When the Village of Seneca Falls dissolved, filing were supposed to take place with the Department of the State,” said Foster during a lengthy explanation. “I’ve only been able to find a seven page document,” he added, noting that a document binding something like the HPC would be hundreds of pages long – if properly administered and filed.

While Deputy Supervisor Lou Ferrara raised concerns about long-term costs, the answer he received from Foster was not ideal for a community staring down extensive legal costs as it is now. The Town of Seneca Falls is already facing multiple Article 78 proceedings, involving a sewer line expansion, landfill, and now historic building. “This is not good,” Ferrara added simply after the session.

During discussion Ferrara pointed the blame back at the committee. “This particular committee isn’t happy with your representation and I don’t understand why. From what I’ve read you’ve answered everything in a timely manner, you’ve appeared every time you were supposed to, and I don’t know how it go to this point where we have to go outside the box,” he continued.

At that point, avoiding a default response, Foster said he changed the answer to being representative of only the Town Board and advised the HPC that they were going to be in default if they didn’t file an answer – and if they won’t sign it I can’t submit it.”

Foster said that the HPC responded harshly to his proposed answer to the Article 78, and even questioned his legitimacy as an attorney in the process.

Board Member Dave DeLelys asked about possible conflicts of interest, given that members of the HPC own property near the litigated property, which sits at the corner of Fall and Rumsey Streets.

“I feel that there are multiple conflicts on that board and I feel there are conflicts of this board,” responded Foster. He noted that from architectural reports, the building is challenged. He also notes that Board Member Doug Avery, and members of the HPC are part of ‘Preserve Seneca Falls, LLC.’.

“Mr. Koch has an argument that he was called to appear before a board that does not exist,” concluded Foster, getting to the core of the debate around the future of the vacant building at the busy corner on State Route 5&20.

Board members Vic Porretta, Lou Ferrara, and Dave DeLelys voted ‘yes’ on the resolution to go with outside legal counsel. While lone opposing vote was Supervisor Lazzaro.

16 mins ago
On Wednesday, Governor Andrew Cuomo announced that outdoor dining would be allowed in the second phase of economic reopening. Numerous ... MORE

42 mins ago
Officials joined in peaceful protest during the afternoon hours in the city of Canandaigua, as another regional rally was held ... MORE