As contradictory as it sounds, Jackson Rutledge’s Auburn debut was a game powered by offense, and a humongous amount of it. In the end, the Doubledays (11-13) fell to the West Virginia Black Bears (14-10) 10-9 in game three of the series.

This game was an absolute marathon. The back-and-forth affair lasted five hours and nine minutes, the longest game of the Doubledays season by nearly two hours. Every game in this series went longer than three and a half hours. 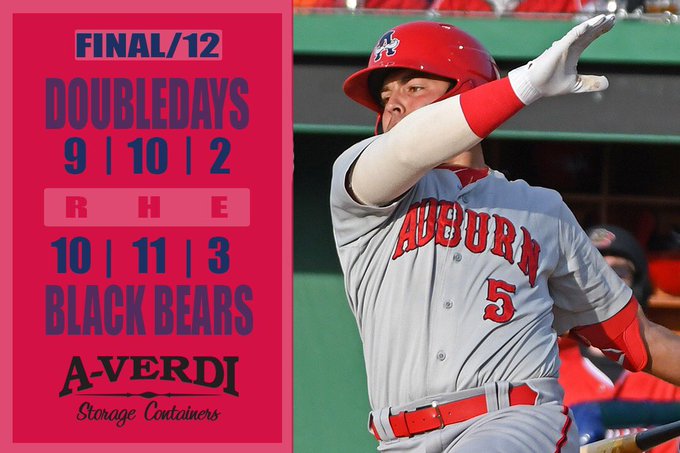 This game got moving from the jump, with the fanfare apparent for Nationals first-round selection Jackson Rutledge. The 6’8″, 250 pound right-hander struggled in his first inning of work, allowing two runners to reach before West Virginia OF Matt Gorski smacked a three-run home run to right field. Rutledge walked the next hitter, but got out of the first with two fly outs immediately following. He tossed a scoreless second frame an inning later.

Auburn would match the three-spot with one of their own to tie the game in the top of the third. Anthony Peroni led the inning off with a single to left, and Zach Collier followed with a walk of his own. From there, the run production came from a string of three hitters in a row. 2B David Masters smashed an RBI-double to left center, 3B Drew Ward plated one with a groundout, and DH Onix Vega drove in Masters with an RBI-single of his own.

The Black Bears took back the lead in the bottom of the fourth inning on a double from West Virginia 3B Jared Triolo, which plated two runners to make it 5-3.

Auburn had the retaliation, with a bit more in store. It started in the fifth with Masters, who sent a moonshot into the Doubleday bullpen in left field for his first home run with Auburn in 2019. In the sixth, Wilmer Perez walked and came around to score on a fielding error by then pitcher Jacob Webb. Just before the stretch, Auburn took a 6-5 lead in the seventh on a wild pitch from Webb, which plated Masters.

West Virginia knotted the game once again in the bottom half of the seventh. DH Kyle Wilkie plated CF Brett Kinneman on an RBI-single against Doubleday RHP Bobby Milacki.

Oh, but it could! The go ahead run came in for Auburn in the top of the eighth on an RBI walk from Onix Vega. West Virginia RHP Xavier Concepcion walked three in a row to load the bases, and RHP Austin Roberts walked in the go-ahead run for Auburn.

In the bottom of the ninth, more chaos. Kinneman led off the inning with a double to right center, and Wilkie plated him with an RBI-fielder’s choice to tie the game at seven apiece.

In extras, Auburn INF Jack Dunn, who came on as a pinch runner for Ward, cracked an RBI single to right to give the Doubledays the lead in the 10th, but West Virginia got it right back in the bottom half, scoring on a wild pitch from DDay RHP Fausto Segura. 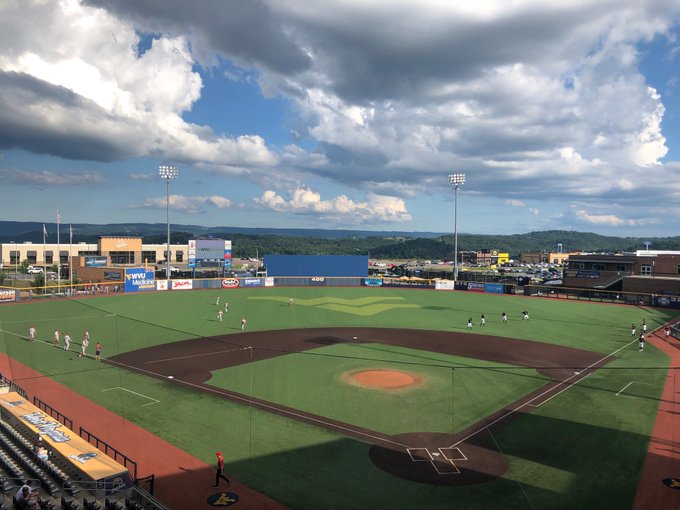 In the 11th, it was OF Jeremy Ydens who gave Auburn back the lead. He pelted a double down the left field line to break a 22 at-bat hitless streak for the UCLA product, and give Auburn a 9-8 lead, plating pinch runner Jake Alu. But, Jared Triolo had an answer. The West Virginia infielder ripped an RBI single to tie it at nine.

It was the 12th that was the final frame in this ballgame. After a scoreless top half put up by the Auburn offense, West Virginia won the game on a walk-off error by Auburn SS Jose Sanchez.

Masters was the man who stood out for the Doubleday offense on Tuesday night. The infielder on rehab from Class A (Adv.) Potomac went 2-3, but reached base all four times he came to the plate. He finished with a hit-by-pitch, an RBI-double, and a solo home run, with three runs scored.

Rutledge started the game for Auburn in his Short Season-A debut, and went two full innings. He allowed three hits and three runs, but only two of which were earned. He walked two hitters, and struck out one. RHP Todd Peterson also made his Doubleday debut, and threw 2.2 innings of two-run baseball, striking out two and walking two.

On Wednesday, Auburn welcomes in the Connecticut Tigers as its first non-Pinckney Division opponent this season. Game One of the three game set will get underway at 7:00 p.m., with RHP Niomar Gomez getting the nod on the mound.

If you can’t make it to Falcon Park tomorrow, you’ll be able to listen to the radio broadcast LIVE on FingerLakes1.com.

3 hours ago
The Cayuga County Health Department is holding walk-up rapid testing clinics for those not experiencing COVID-19 symptoms next week. The ... MORE