The Rochester Americans (29-17-3-4) built a 2-0 lead midway through the second period only to see the first-place Belleville Senators (34-15-4-1) counter with three straight tallies, including the game-winning goal 1:12 into overtime, to steal a 3-2 win from the Amerks Wednesday at The Blue Cross Arena.

Despite the overtime loss, the Amerks, who remain in second place in the AHL’s North Division standings, have earned a point in 11 of the 16 all-time meetings with Belleville dating back to the 2017-18 campaign. 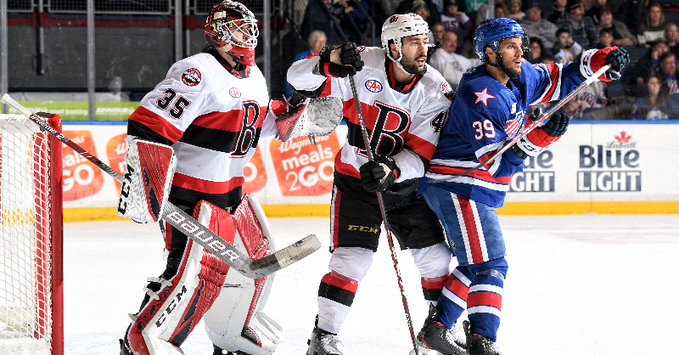 Forward Jean-Sebastien Dea scored his team-leading 15th goal of the season to go with an assist while rookie defenseman Jacob Bryson notched his first pro goal in the second period. First-year netminder Ukko-Pekka Luukkonen (3-3-2) made 15 saves in his third consecutive start but suffered the overtime loss.

Back at it on Friday ? pic.twitter.com/UlLCFRvowe