Last fall, high-tech diagnostics maker Rheonix applied to the Food and Drug Administration for clearance of its molecular test for certain transmissible infections. It would have been the Lansing-based company’s first foray into the clinical market.

Then COVID-19 hit and Rheonix faced an uncertain timeline for FDA approval.

But it also believed its scientific and technical expertise could help. And it had already developed equipment that could analyze the genetic makeup of a pathogen—a microorganism that can cause disease.

“We adapted that test to look for the genetic sequence that identifies this particular coronavirus,” said Greg Galvin, president and CEO of Rheonix. “Then we went through the FDA’s emergency use authorization process to get the assay available for use by clinical laboratories.”

Incredibly, the entire effort—from starting development of the COVID-19 assay, or test, to getting emergency use authorization—took only three months. Rheonix then began delivering the test to hospital laboratories in Central New York.

“It was a very quick process,” said Galvin. “In contrast, the application we submitted last fall was a 1,500 page document that took about three years.”

“The pace was unparalleled and people were working 24/7 to make it happen,” he added.

The Rheonix system consists of two main components: one, a test that enables detection of the virus that causes COVID-19; and two, a Rheonix-made, fully-automated workstation, which processes the test.

A technician simply places the samples on the workstation and the device takes care of the rest.

“Literally, you load the samples onto it and press go,” said Galvin. “Your answers come back with no more human intervention.”

Standing out in a competitive field

“Whether we’re testing for beer spoilage pathogens, listeria, or coronavirus, the process is virtually the same,” said Galvin, “except the genetic target is unique to the organism we’re looking for.”

Galvin noted that nearly every company able to make a test did so in response to the coronavirus pandemic.

But few compete on the same level as Rheonix. According to Galvin, only a handful of companies offer a fully automated test.

“There are probably a half dozen companies worldwide that make a fully automated sample-to-answer system, which is what ours is,” he said.

Rheonix’s primary differentiators are cost per test, and throughput, or the rate at which samples can be tested. 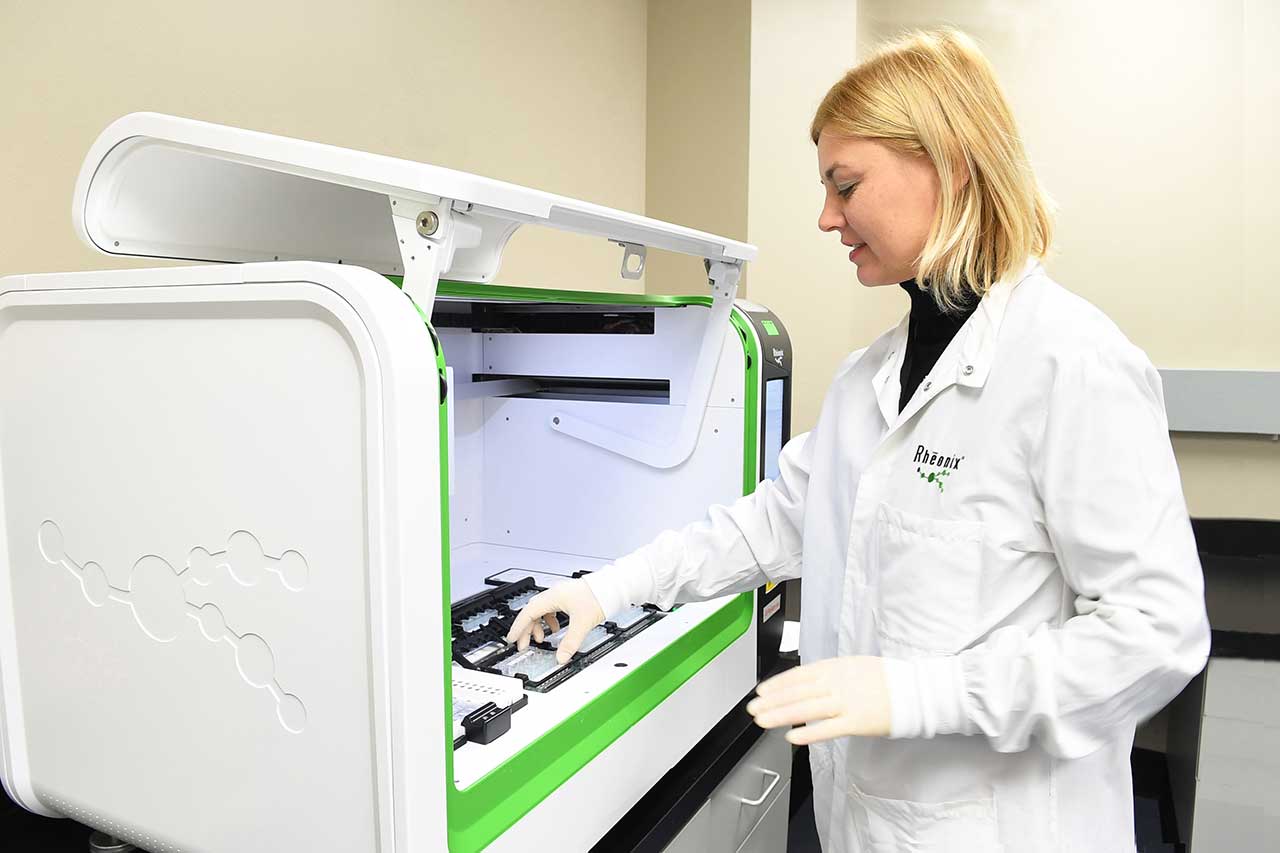 “We certainly believe ourselves to be, by far and away, the lowest cost competitor in the business,” said Galvin. “On throughput, our system will run a little over 100 samples a day.”

That has been a good fit for the region’s small to midsize hospital systems, he said. “It allows communities to get same-day answers instead of shipping samples off to a state or national laboratory,” he said.

The company’s 60 employees have been working intensely to meet local needs. “A national emergency is a good way of motivating everybody,” said Galvin. “There’s a shared goal, knowing that we can be part of the solution to something we’re all affected by.”

A serial innovator and entrepreneur

Asked where he is from, Galvin responded, “That’s not a simple question.”

“I was born in Wisconsin but lived on both coasts and in Switzerland and Argentina,” he said. “I didn’t live anywhere more than three or four years growing up, and then I came to Ithaca in 1980 and have been here ever since.”

It was a journey of 3,000 miles. After earning his undergraduate degree from the California Institute of Technology, Galvin began graduate studies at Ithaca’s Cornell University. He subsequently earned three degrees, including a Ph.D. in materials science and an MBA.

In 1993, Galvin founded Kionix to commercialize a micro-electromechanical system (MEMS) based on technology developed at Cornell.

Seven years later, he sold part of that company to California-based Calient Networks. Galvin continued to develop other applications for the MEMS technology, including a highly successful microaccelerometer for smartphones.

Kionix had “dabbled in microfluidics,” Galvin said, “or making little channels in silicon to move chemicals around and do chemical analysis.”

Because that technology was not based on MEMS, in 2008, Galvin launched Rheonix to pursue opportunities in the molecular diagnostics industry. He then sold the rest of Kionix to ROHM Semiconductor in 2009.

Galvin has significant professional and personal ties to Cornell. Kionix and Rheonix succeeded in large part due to the university’s research and development capabilities.

He is a past trustee of the university and is a member of several advisory councils. Galvin was named Cornell Entrepreneur of the Year 2014. He holds 58 patents.

His oldest son, Thomas, is a 2019 Cornell graduate; his daughter, Kristen, and son, Andrew, are both Cornell students.

“The Finger Lakes is a very comfortable place to live,” said Galvin. “By and large, people who come here stay here, and find it a nice environment to live and work. And certainly, having the wealth of the area’s academic institutions is very attractive as well.”

Click here to read the full feature by Krista Gleason and learn more about Rheonix at: LocateFLX.com

1 hour ago
The New York State Fair has been cancelled. “This one hurts – I love the State Fair. But the risk ... MORE