What did officials in Ontario County know about Ontario Center for Rehabilitation and Healthcare in Canandaigua? Over the last several days, an investigative series into the facility has uncovered a multitude of apparent shortcomings by administration during the COVID-19 response. But what did Ontario County Public Health know about these shortcomings?

Connie Helker, a former front desk receptionist and housekeeper had been terminated from her position at the Ontario Center for Rehabilitation and Healthcare in Canandaigua.

After vacating the premises on March 30th, she did not test positive for COVID-19 until April 1st – and entered the start of her quarantine.

Shortly after, Helker received the assistance of Rosemary Strub, BSN, who works in the Ontario County Public Health office and specializes in communicable disease surveillance and reporting.

Between April 4th and 6th, Strub reached out to Helker for the first-time and continued checking-up on her – each and every day while recovering from the coronavirus as the first Ontario Center employee who contracted the virus.

Once her quarantine ended, Ontario County Director of Public Health Mary Beer signed her release note to clear her on the 17th – sixteen days after initially testing positive.

Although Helker was the first COVID-19 tested positive employee case from the long-term care facility, Beer did not speak about the conditions or current situation at Ontario Center.

Instead, Helker says she never sparked any communication between Beer and herself at all – prior to, during, or even after her self-isolation and quarantine while battling COVID-19. She’s a three-time cancer survivor, who’s health has been compromised already.

“I never talked to her at all. I just spoke to Rosemary,” Helker told FingerLakes1.com.

But during these daily check-ups, Helker says that she provided routine updates about the horrific conditions that she personally witnessed while still working at Ontario Center amid the pandemic before she departed from her occupational responsibilities.

While confiding in Strub’s daily calls, these complaints and incidents spanning over a time period from as early as April 4th until April 17th were then directly relayed to Beer, according to Helker.

In the meantime, however, Ontario County’s public health office did not issue any public statements about Helker – or the same allegations that she brought forth eventually to FingerLakes1.com.

Rather, five Ontario Center residents passed away from COVID-19 between the time in which Helker stayed at home and reportedly aired her allegations regarding abuses, mistreatment, and negligence at the facility, all of which have endangered numerous residents and staff alike.

When FingerLakes1.com sought to speak with Strub regarding Helker’s complaints to see if the county had knowledge about Ontario Center, she responded, “I don’t think I should be answering these questions. I’ll probably get myself in trouble,” and prevented the conversation from going further.

As a result, FingerLakes1.com has submitted a FOIL request to Ontario County in response to Helker’s assertion that complaints were formally filed by Strub and subsequently shared with Beer electronically. 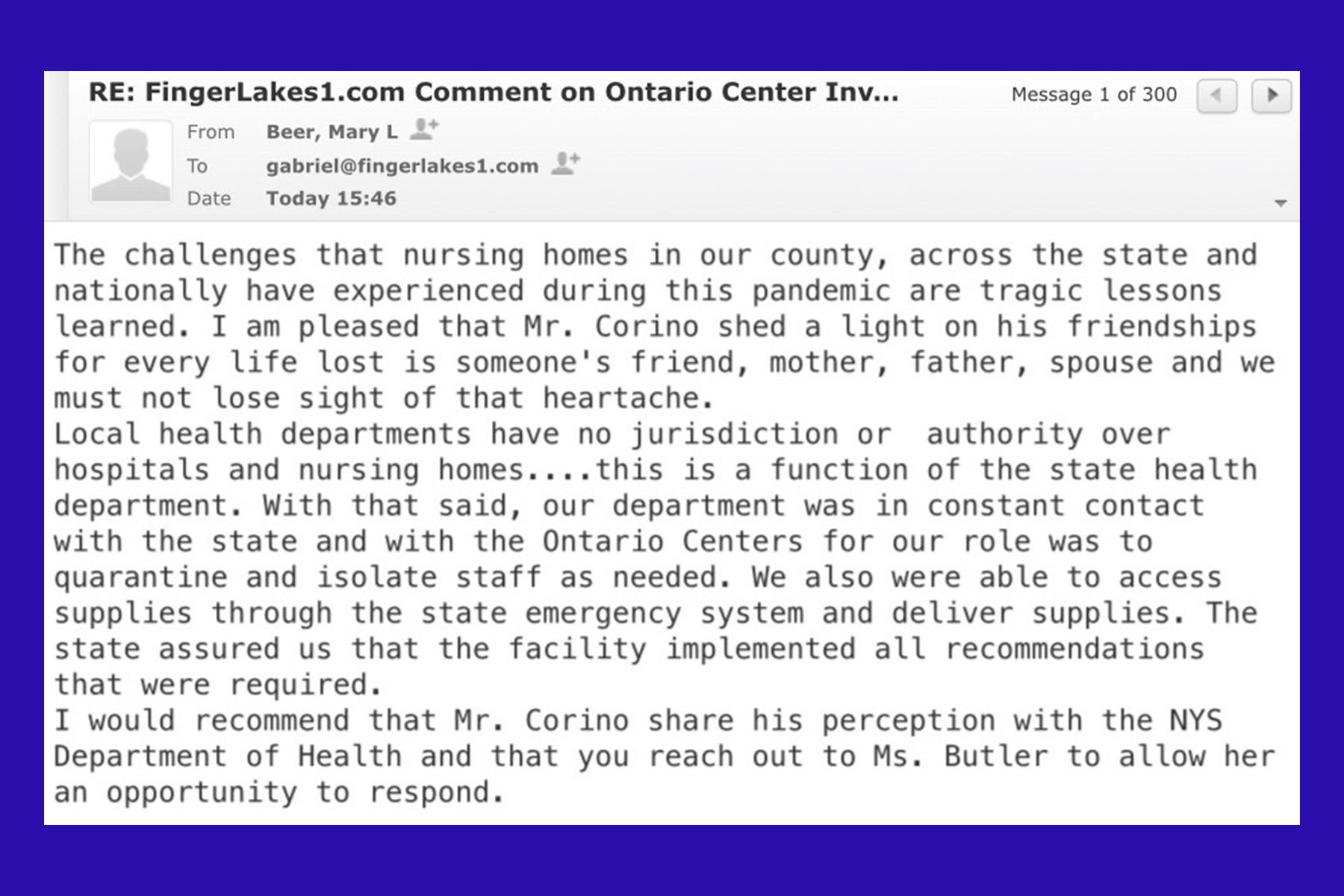 Related: Employee at Ontario Center had to develop his own COVID-19 safety plan as admin failed to create one

Below is Beer’s initial response to FingerLakes1.com’s first investigative piece on Ontario Center, which uncovered that an employee had to develop his own COVID-19 response plan because there was non developed by administration internally.

“The challenges that nursing homes in our county, across the state and nationally have experienced during this pandemic are tragic lessons learned. I am pleased that Mr. Corino shed a light on his friendships for every life lost is someone’s friend, mother, father, spouse and we must not lose sight of that heartache.

Local health departments have no jurisdiction or authority over hospitals and nursing homes…. this is a function of the state health department. With that said, our department was in constant contact with the state and with the Ontario Centers for our role was to quarantine and isolate staff as needed. We also were able to access supplies through the state emergency system and deliver supplies. The state assured us that the facility implemented all recommendations that were required.

I would recommend that Mr. Corino share his perception with the NYS Department of Health and that you reach out to Ms. Butler to allow her an opportunity to respond.”

7 hours ago
On Monday around 4:23 p.m. the Canandaigua Police Department was called to Lakefront Park for the report of a person ... MORE

Victor motorcyclist sent to hospital after crash in Wolcott

8 hours ago
The Wayne County Sheriff’s Office reports that they are investigating a motorcycle crash that resulted in one person being sent ... MORE

21 hours ago
The Steuben County Health Department says 56 cases of COVID-19 have been connected to one nursing home in the last ... MORE

Investigation underway after dog abandoned between Canandaigua and Geneva

10 hours ago
The Ontario County Humane Society says it’s investigating an incident of an abandoned dog. Around 11 a.m. on Monday a ... MORE