The Kiwanis Club of Canandaigua held its annual meeting in September, honoring award winners, milestone anniversaries and inducting new board members. The event was held at the American Legion in Canandaigua, home base for the club’s weekly meetings.

The event marked a change in Kiwanis Club of Canandaigua’s leadership. Heidi King was named Past President, 2020-21, and was honored for her success in leading the club through a prosperous year, despite the impact of the COVID-19 pandemic. She was also honored for the leadership she showed for the club’s golf tournament, “Chipping in for Kids.” 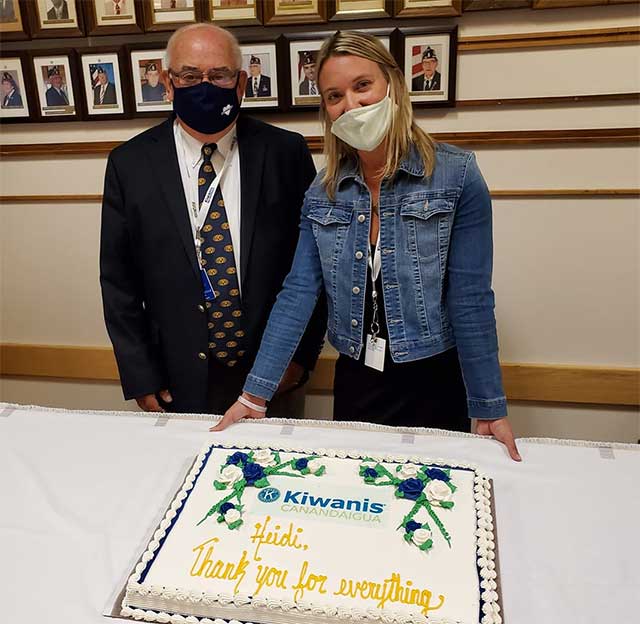 Lou Loy was installed as the 2020-21 Kiwanis Club of Canandaigua President.

“This was a year nobody expected,” said Loy. “I admire the decisions Heidi made and am so impressed with her leadership. We’re all volunteers, and we’re all in this together.” Outgoing Board Members (2017-2020) were thanked for their service. They included Nanci Bentley, Mark Brown, Steve Fantuzzo and Jim Hough.

Kiwanis New York District Governor Joseph Ruggiero and First Lady Debbie Rought were presented a check on behalf of the Finger Lakes Division for $500 towards the American Foundation for Suicide Prevention. Legion of Merit awards were awarded to those members who had completed 5, 10, 15 and 20 years as members of Kiwanis Club of Canandaigua. This year’s honorees include: 5 years: Nanci Bentley, Chris Harvey, Chet Starowitz; 10 years: Dave Metting and Pam Metting; 15 years: Marie Blair; and 20 years: Bill Fuge and Kim Snyder.

The Kiwanis Club of Canandaigua meets weekly at the American Legion in Canandaigua – all are welcome to join or be a meeting guest. “Serving the Children of the World,” Kiwanis is a service organization of over 800,000 individuals with one single purpose, to serve our communities. For more information, visit CanandaiguaKiwanis.org.

9 hours ago
Visitor restrictions are back at one local hospital operated by Rochester Regional Health as COVID-19 cases climb following an outbreak ... MORE