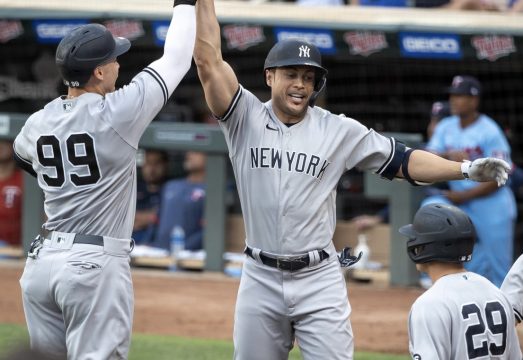 Gerrit Cole responded to the ongoing debate over “sticky stuff” with a nine-strikeout performance, while Aaron Judge and Giancarlo Stanton stole the show with thunderous swings as the Yankees rolled to a 9-6 victory over the Twins on Wednesday evening at Target Field.

Following a week in which Cole’s recently reduced spin rate became a hot talking point, Cole tipped his cap after striking out Josh Donaldson in the first inning. He then whiffed the 2015 American League MVP once more in a six-inning effort.

Cole scattered five hits without a walk, pitching around a pair of solo homers as he cruised to his seventh victory of the season.

Judge and Stanton homered as teammates in the same game for the 10th time, with the Yankees improving to 10-0 in those contests. Judge’s first-inning blast put New York on the board as the Yanks struck early and often against Randy Dobnak, who was battered for eight runs and 11 hits over 4 2/3 innings.

Brett Gardner doubled home a run in the second inning before Stanton launched a mammoth 423-foot, three-run blast to center field in the third inning. Stanton went deep again in the fifth, a two-run shot. Miguel Andújar added a homer, his fifth in eight games.